We track this news on blog now.

Get a pulse of H4-EAD community. 2000+ people have already responded.
You need Google account to fill it. You will be able to see results after you have filled your own data. No email collected. No spam. Your response remains anonymous.

Withdrawing H-4 EAD is on DHS time table for 2018.
The aim is to remove H-4 Dependent Spouses from the class C(26) of Aliens Eligible for Employment Authorization (EAD).

This rule is designated as “Economical Impact and Significant” by DHS, meaning that each step of the rule making processes for OMB review clearance can be completed in 30 days or less rather than 60 days or 90 days.

Bad news for H-4 EAD holders as the work authorization was given in May 2015 after a long wait and they now aim to take away right to work to gain political miles.

On February 25, 2015, DHS published a final rule extending eligibility for employment authorization to certain H-4 dependent spouses of H-1B nonimmigrants who are seeking employment-based lawful permanent resident (LPR) status.
DHS is publishing this notice of proposed rule making to amend that 2015 final rule.
DHS is proposing to remove from its regulations certain H-4 spouses of H-1B non-immigrants as a class of aliens eligible for employment authorization. 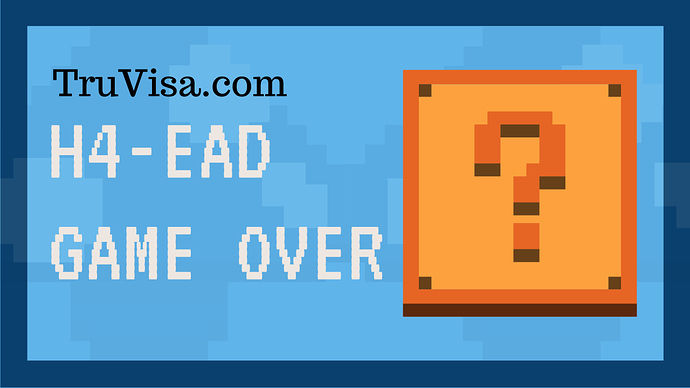 Will existing H4 EAD holders be allowed to work for EAD validity period?

Depending on what rule DHS comes out with, there is a possibility for a litigation be filed in court to stop the withdrawal and get a STAY on DHS’s decision.

This may be a long battle in court too.
This essentially means that if we get a stay, the H4-EAD can still be given until court makes a final decision.

Travel outside USA during H4 EAD application pending
Wait for DHS H4 EAD decision to file F1 to H4 COS and H4 EAD?
Cooling period definition for new H1B
Any timeline on when H4 EAD will be terminated
Got good job offer, Abandon H1B and move to India when H4 EAD is being terminated?
Will H4 EAD applied now be approved as DHS is working on revoke rule?
H4 EAD denied due to wrong category selected in i765 application?
Include H4 EAD renewal after H1x upgradation to PP?
H4 EAD Termination Survey - H1B spouse mindset and future plan of action
H4 COS, H4 EAD pending - Can I apply for H1B PERM and I140 in 6th year?
Anil_Gupta (Anil Gupta) split this topic April 2, 2019, 3:44pm #5

5 posts were split to a new topic: Apply new H4 EAD before its withdrawal by DHS?

H4-EAD holders are needed to collaborate and help SAVE H4-EAD.

As per latest information, DHS has already started working on this rule and they are on-track to publish the clauses for removing H4-EAD by February 2018.

This is high time and everybody, who is affected, should come forward and join hands with this group:

This is a Facebook group that’s trying to create a response to DHS rule publishing and submit at-least 50,000 comments.

Please join the group and help make it a bigger and stronger collective voice, that can be heard, as loud as possible by DHS and Trump administration.

Remember:
DHS will publish the final rule and then wait for public comments for 30 days (since this is marked as economically significant rule). The H4 EAD is going down the drain faster than we can think of.

We represent employers who are committed to growing the U.S. economy and creating jobs for American workers. However, we cannot achieve these goals unless companies can recruit and retain the most qualified employees.

2 posts were split to a new topic: Will DHS allow existing H4 EAD to work till their EAD expire?

The federal court has allowed DHS motion. This means DHS can start on the H4-EAD removal rule making.

The SaveJobsUSA VS DHS case is now in HOLD (Abeyance).

This is because DHS has planned to take off the H4-EAD and the case will not hold any significance if the DHS ultimately withdraws H4 spouse work permits.

CURRENT STATUS : DHS has not published any rule yet as nothing has been sent to OMB.
We are tracking the DHS progress and will keep updating this page.

The H4-EAD sun-set is pretty much imminent at this point of time.

Following are the excerpts of court decision:

The United States Court of Appeals for District of Columbia Circuit has issued the following order:
Notice of Docket Activity: The following transaction was entered on 02/21/2018 at 10:58:36 AM EST and filed on 02/21/2018
Case Name: Save Jobs USA v. DHS
Case Number: 16-5287
Docket Text: PER CURIAM ORDER [1718765] granting motion to hold in abeyance [1710291-2]; denying motion to reschedule briefing and oral argument [1710188-2]. This case will continue to be held in abeyance pending further order of the court. Appellee represents that it plans to issue a notice of proposed rulemaking in February 2018 to remove from its regulations certain H-4 spouses of H-1B nonimmigrants as a class of aliens eligible for employment authorization. Appellee is directed to file a status report within 90 days of the date of this order, and every 90 days thereafter. The parties are directed to file motions to govern further proceedings within 30 days of appellee’s completion of the proposed rulemaking. Status Report due by 05/22/2018. Before Judges: Rogers, Griffith, and Kavanaugh. [16-5287]”

5 posts were split to a new topic: Should I change status from H4 EAD to H1B before DHS cancels my EAD?

7 posts were split to a new topic: Is it final that DHS will remove H4 EAD soon?

2 posts were split to a new topic: Stay with H1B contract or convert to H4 EAD full time opportunity at this time?

DHS is now looking at June 2018 to come up with the H4 EAD termination rules.

DHS has not published any rule yet, for H4-EAD withdrawal / removal as anticipated based on their 2017 Fall rule making agenda and official timelines mentioned there.

This is a temporary relief and does not mean that they have abandoned their intention. They are probably working on the rules and trying to find ways to mitigate any lawsuits that may crop up in future.

DHS on Feb. 28 said “ significant revisions ” were made to a draft that originally was slated for a February release.
Those revisions required a new economic analysis, which “ required an additional several weeks to perform ,” the DHS told a federal appeals court.

Stay tuned as we keep an eye on the progress.

2 posts were split to a new topic: Will H4 EAD support letters sent by tech Giants push DHS to change their decision?

4 posts were split to a new topic: Is it too late to apply H4 EAD with DHS is almost ready to withdraw EAD?

If Cessna’s words can be read correctly, he clearly suggests that nothing can be done to stop the demise of H4 work permits.

“the public will be given an opportunity to provide feedback during a notice and comment period”.

Read the full text of the letter here: 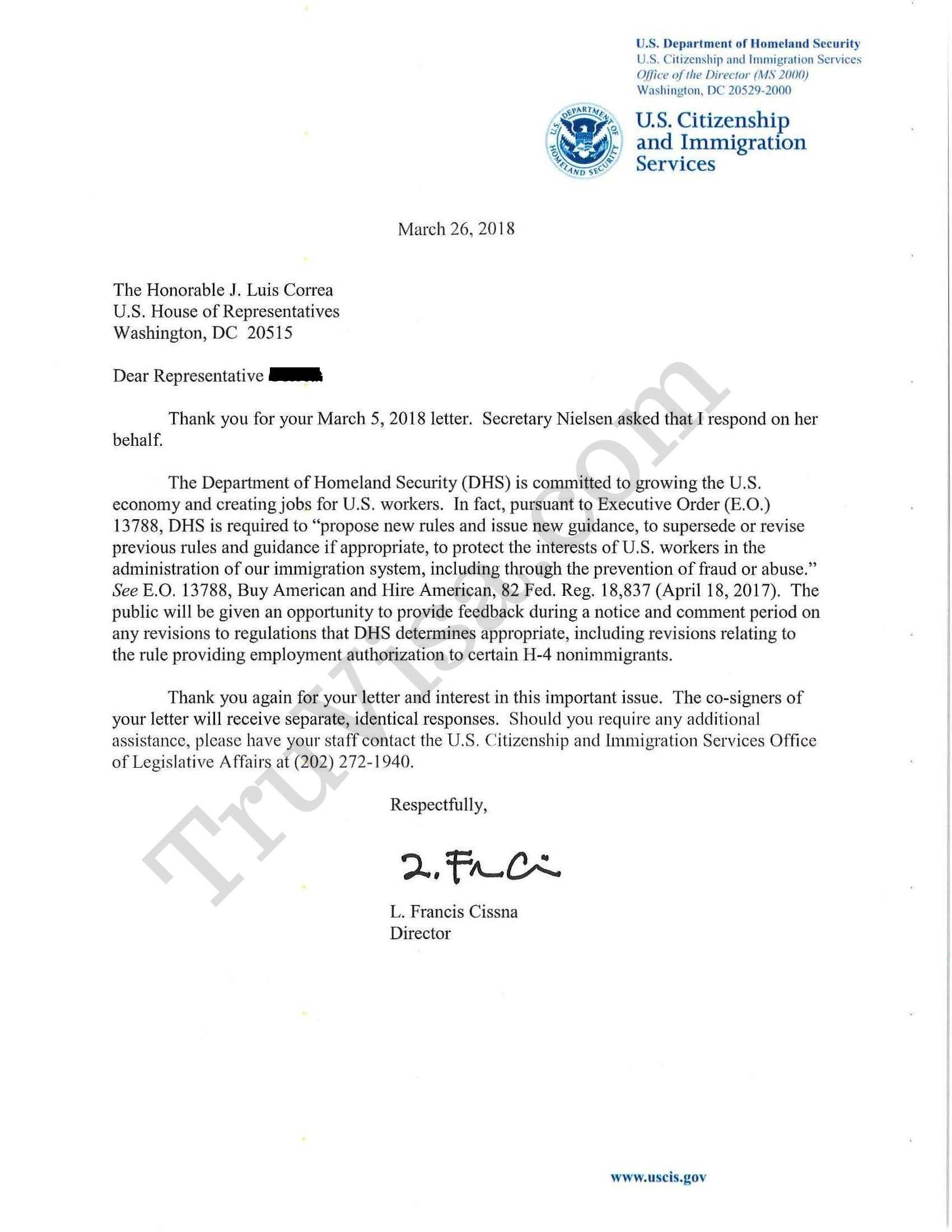 Cessna has responded on behalf of DHS.

The news is not good for H4-EAD from anywhere. Trump administration and its agencies are aggressively working on taking the work permits away!

“A former communication is expected to be made later this summer,” US Citizenship and Immigration Services (USCIS) Director Francis Cissna said in a letter to Senator Chuck Grassley.

“Our plans include proposing regulatory changes to remove H-4 dependent spouses from the class of aliens eligible for employment authorisation, thereby reversing the 2015 final rule that granted such eligibility,” Mr Cissna said.

Read the full text of the letter here and about H4-EAD on page 2, last paragraph:

3 posts were split to a new topic: If H4 EAD rule is revoked, how long will it take to get implemented?

2 posts were merged into an existing topic: Will DHS allow existing H4 EAD to work till their EAD expire?

An immigration group fwd.us backed by Facebook, Apple, Microsoft and other big tech companies has criticized USCIS and DHS’s decision to withdraw H4-EAD.

In response to USCIS director Cissna’s letter highlighting the plan to terminate H4-EAD work permits by 2018 summer, they have released a report that highlights the effects of such a barbaric move and the kind of financial burden that this change would cause on H1B families and spouses.

“The current administration must reverse its attempts to use the regulatory and policy process to make it harder for international talent to contribute to the United states, and to make it more challenging for those who are already here to contribute.”

“There is no question that our immigration system is fundamentally outdated and broken, but the answer cannot be simply shut the door; instead, we must begin the hard but crucial work of reform to ensure that immigration remains a driver of our economy and America’s unique competitive advantage for generations to come.”

2 posts were merged into an existing topic: Will H4 EAD support letters sent by tech Giants push DHS to change their decision?

H4 EAD work authorization removal final rule is now expected to be published for OMB review in June 2018 and public comments by DHS.

Since, this is marked as ‘economically significant’ rule, DHS has the option of wrapping up the comment period in 30 days only!

DHS is working on it and is eager to get it our as early as possible to get some political mileage before mid-term elections.

The DHS Spring 2018 agenda proves that they are working on it.

All H4-EAD workers and beneficiaries, get ready for a roller coaster ride. News is not going to be good next month.

I know a lot of people who were working on H4-EAD and were eligible for H1B, have already converted.
If you can, you should too convert as early as possible to keep your job and income source un-affected.