My current passport was issued in 2009 at New York and I’ve to renew it soon. After completing the CKGS website, I’m facing a problem while filling up the “Government Online NRI Passport Form”.

My “Passport Printable Address” is an Indian address. However when I’m trying to fill the “District” information, it doesn’t match the district information mentioned in the passport.

The name of district in passport is ‘Hooghly’(in West bengal) , however the drop down menu suggests “Hooghly-Rural”. Note that many of the names that appear under the ‘district’ drop down menu are not really official districts.

It appears to me that these are something like “Police Districts”. Because if I choose “chandannagar” (marked in red) then it would have the police station nearest to my permanent address and where from my police verification was done when I made my first passport in 1999.

As these are very important info. and will be printed on the passport, my dilemmas are:

I’m asking this because if they do so my passport will land up in a faraway ‘police district’ and would get caught in red tape and would definitely delay the process.

If I opt for “Chandannagar”, and if they do police verification, it falls under the jurisdiction of our nearest Police Station. However Chandannagar is not a district and never mentioned in my current passport 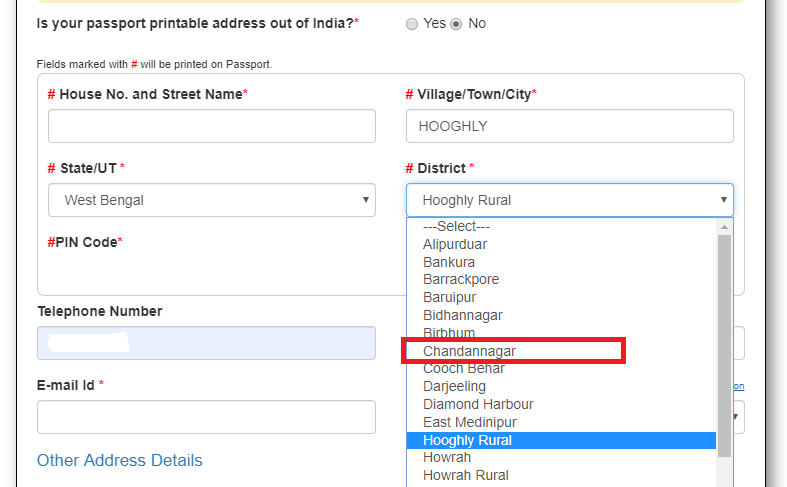 Hooghly_rural.png787×487 18.6 KB
Lastly can CKGS or the New York consulate can help in this regard? Can somebody please provide the phone. no. of CKGS New York?

New York embassy will not answer questions about your district. Only CKGS customer care can help and that too they will only suggest to select the most appropriate name from the list.

You can select the Hooghly Rural is that’s what you think is correct.

The Indian Embassy does send the request to Indian RPO for police verification before issuing new passport.